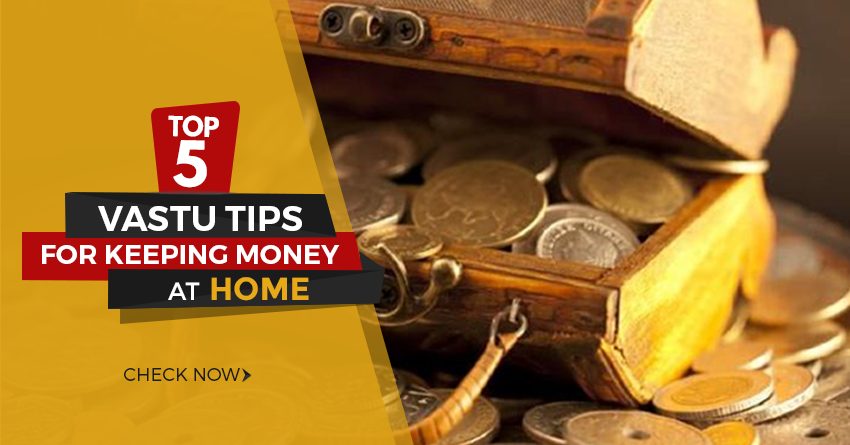 Published: Thursday, 02 February 2023 11:38 AM | By VastuWiki Team
Vastu Shastra came into existence as an ancient science that was deeply acknowledged by sages for several reasons such as keeping money at home. Ancient sages laid down some principles derived from laws of nature, following which, the human race could enhance its way of living. Wealth at home has a major role to play in everybody’s life. Vastu Shastra is based on the perfect harmony among the cosmic energies that facilitate humans to lead a contented and prosperous life. Well, Lord Kuber is believed to shower blessings with wealth on those who follow Vastu tips with discipline. The tips to keep Lord Kuber happy and your house prosperous with wealth that will gradually but surely affect your luck are given below.

The 5 effective Vastu tips for keeping money in your home are:-

Overall, an individual’s actions decide the flow of energies inside and outside the house such as the rooms or surroundings around the house should be kept mess-free. You just need to follow Vastu tips with discipline and these guidelines will facilitate the flow of money at home. This will lead to maintain harmonious as well as balanced energy cycle in the house.

Most Popular Answers for vastu

Should one follow Vastu advice if the shop is rented?

Vastu is universal and can be applied to any rented space. The energy in the space can not only impact you, but also make or break your business. Commercial Vastu can help with balancing the negative and positive energies. It also helps with selecting the best-suited directions, space arrangement, design and even the best plants and decorative items for a commercial space. When the Vastu tips for a commercial complex are followed, it ensures that both the owner of the shops and builder will prosper and lead a positive life.

Where should the drinking water be placed in the shop according to Vastu?

To ensure the best experience for your customers, you should have drinking water (whether filtered or from an earthenware pot) in the north, northeast, or east direction.

Is the Singh-Mukhi shop auspicious according to Vastu?

According to Vastu, the Singh-Mukhi (lion-faced shop, or Sher-Mukhi) shop is considered lucky. With a narrow back and wide front, it should feel like a lion's face in the eyes of passersby.

Which color Ganesha is good according to Vastu?

White Ganesha, also known as Shweta Ganapati, is considered to be an important symbol of prosperity, wealth, and happiness. According to Vastu Shastra, it is believed that worshipping a white Ganesha brings with it luck, prosperity, and fortune. It is believed that one who worships Ganesha with a white idol will be blessed with success and abundance. Additionally, it is also said to bring peace and harmony to the home and the people residing within it. Thus, a white Ganesha is the perfect choice for those who are looking to attract prosperity and peace into their lives.

Which idol is good for home entrance as per Vastu?